Arizona job growth has outpaced the nation since hitting bottom in fall 2010, but is still digging out of the significant hole left by job losses during the downturn. While Phoenix has experienced much of this growth, Tucson has not enjoyed the same progress. Local unemployment rates continue to improve ending May at 6.3%, a full percentage point improvement since January 2013. Retail sales in the metro area were up 2.1% year-over-year, and May home sales posted positive numbers with median prices up 12% and closings up 11%, both over May 2012.

No meaningful traction for the lease market

Ticking up to a vacancy of 12.0%, the Tucson office market posted negative absorption of 62,185 square feet (sf) in the second quarter, primarily the result of Tucson Orthopedic Institute vacating their Wyatt building for newly constructed quarters on the Tucson Medical Center campus. Occupancy remained in the same range as posted three years ago.

While inquiries increased as a result of pent up demand, meaningful momentum had not yet occurred. With many office users still occupying excess space, relocations typically resulted in downsizings, thereby increasing vacancy.

Activity increased by mid-year, with a return of 1031 money to the market seeking investment property. While product remained limited, investors perceived opportunity for higher returns in Tucson than could be achieved elsewhere.

User sales included the transfer of the 37,204 sf historic Manning House downtown to El Rio Health Center, and numerous single-user office buildings, the majority of which fell in the 1,500 to 3,500 sf range. 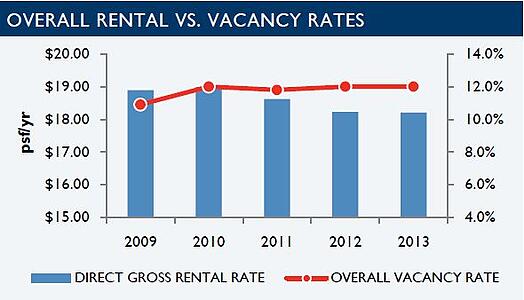