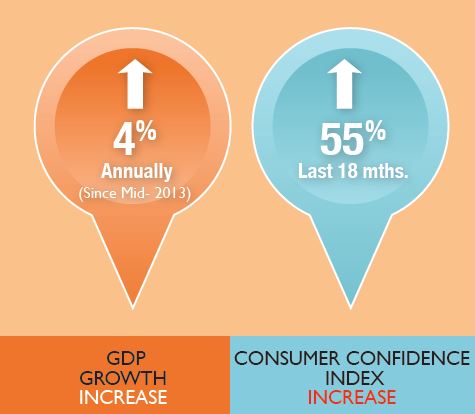 Many of the drivers of faster spending growth are in place.

Income is rising. A lot is being written about the slow pace of wage growth, but income is actually growing at an accelerating rate. From December 2013 to June 2014, inflation-adjusted after tax income increased at a 4.3% annual rate.That’s up from a 0.4% rate in the second half of 2013.

More people are working. Payroll employment has increased by 2.57 million jobs over the last 12 months, the largest 12-month increase since April 2006.We expect the pace of job growth to remain strong well into 2015. Faster job growth causes faster income growth.

Confidence is rising.The Conference Board’s Consumer Confidence Index jumped in July to the highest level since before the recession. In the last 18 months, this index has increased more than 55%.

Debt burdens are historically low.The average household monthly interest and principle payments as a percent of after tax income was 9.9% in the first quarter. At the end of 2007, when the recession began, it was 13.2%.That steep decline means that household balance sheets are in much better shape and consumers have the capacity to borrow to finance purchases.

Home prices are rising. Since March 2012, the S&P/Case Shiller home price index has increased 27.3%.The rise in home values is a big contributor to the increase in net worth.The value of real estate on household balance sheets is up 23% since the middle of 2009. When home prices are up, consumers feel wealthier and are more likely to spend. 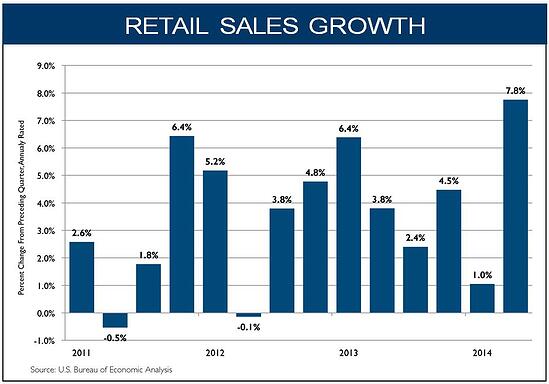