Tipping our (cowboy) hats: In memory of Peter Douglas, SIOR

On December 25, 2014, Cushman & Wakefield | PICOR lost the most colorful block from our metaphorical quilt. Peter Douglas was a founding Principal whose cowboy nature guided a career of client and community impact. He was a founder of Greater Tucson Leadership and was inducted into the YMCA Hall of Fame in which he served on the Board for several years, and as Chairman. He was a dynamic force and presence in our firm and the loss is great.

I sat with Mike Hammond, C&W | PICOR CEO. What follows are Mike's answers to my questions, shedding some light on how Peter made a difference here and throughout the Tucson community. Years ago, I would say you either loved Peter or you hated him. The longer we worked together, the more I knew that if you didn't love Peter, you just flat didn't know him. 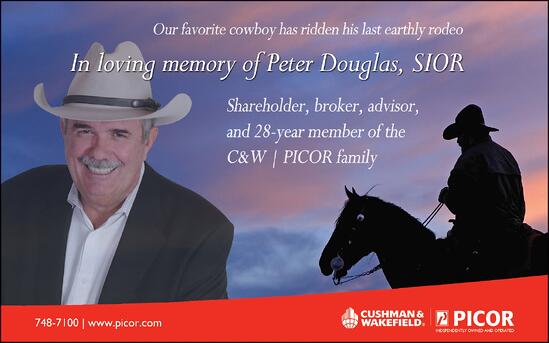 How and when did you meet Peter, and why did you hire him?

I met Peter negotiating the purchase of property for a development in Eastside Research/Commerce Center in the mid 80's. Peter worked for Cienega at the time. I just remember the negotiation went really well -- professional -- I was listened to. Closed on the property and negotiated a second piece of land for a client to develop. The market was starting to crash; no one was building or selling anything. His firm was imploding and he called to ask about brokerage. I don't recall hesitating, despite the hole in his ear where an earring must have been!

What role did Peter play in the Tucson community and how did that impact your business?

I can't single Peter out in this area - everyone here at PICOR does this well. I've never underestimated the impact of our community service activities on the success of PICOR. When you're known in the community as someone who gives back, there is a more collaborative spirit in resolving issues. The message? A lot of PICOR's success is because of Peter's strong, positive presence in the not-for-profit community. Tucson YMCA, Greater Tucson Leadership, PICOR Charitable Foundation, Los Charros del Desierto - one of Los Charros said until they stepped back, they had no idea Peter was making almost everything happen - quite a void to fill. Doing what needed to be done.

What were some of his qualities that clients especially appreciated?

Certainly his openness and intellectual honesty when it came to reality. If he erred, he was sometimes too blunt, but the A-team has always preferred transparent over circumspect. If Peter wanted to make his point, he used exaggeration to his advantage, but he always knew the difference and where to draw the line. He was able to meet the needs of top clients.

What brokerage talents did younger brokers take note of?

I noticed that brokers went to Peter often for advice on deal structure. And also for a reality check, because Peter never sugarcoated reality. He would say, "This f*ing deal is dead. Don't waste any more time on it." That blunt. That crude. I say all the time to new talent we hire, what you really get isn't leads from the top agents. You get advice from superstars. You have no idea how much BS there is in this business. People out there you think are very successful in real estate... aren't. It's just the way it is. A superstar doesn't waste time. Peter had that ability to put a deal together. I see this now. He was a guy who could make things happen.

Peter was part of the fabric of C&W | PICOR. What legacy did he leave on the company culture?

If I'm looking at shareholders who I had implicit trust in their advice, he was always high on the list. He knew when he had to flex - when he had a strong opinion but it wasn't flying. He was attuned to the company culture. Peter was an early warning guy - his intuition was always spot on.

What will you and the C&W | PICOR team miss most about Peter?

That's a tough one. You say vision, enthusiasm, sense of humor...Sometimes that guy would really upset me. But I always knew, from his perspective, I was one of his closest friends and he one of mine. We understood each other. I miss the friendship. We'll miss the laugh. His ability to take an off-color remark and drag it totally into the gutter. You could not hint at a direction without him running with it and running too far. Despite his style, at his core he was a very gentle, kind man.

In closing, two perspectives from our team. Rob Glaser, also a founding Shareholder and industrial team member worked with Peter from his first day at C&W | PICOR. Rob said this of Peter:

"Peter had a good understanding of the Development process and the challenges that came with it. He was smart enough to understand those issues and creative and determined enough to resolve them. He worked very hard and passionaelty on behalf of his clients to put a transaction together and through the obstacles.

Peter was loud, boisterous and very opinionated but was also a good friend and cared about us all. We miss his booming voice but mostly his presence and the loving person he was. We’ll miss his laugh too."

Diane Carlson, Peter's assistant who worked closely with him on C&W | PICOR and personal business, feels the loss as deeply as anyone:

I was blessed to work for a man who cared about me professionally and personally. He was a mentor, a leader and we became friends. His work ethic, integrity and cowboy teachings touched my life and I am grateful. My favorite life lesson from Peter was:

“It isn’t necessary to wait for a crisis to start blazing a new trail. You can SADDLE UP today—no matter where you are, where you’ve been, or how much dust is on your boots.”

Donations in Peter's memory can be made to the YMCA of Southern Arizona.