For those considering solar commercial property in Arizona, Tucson's Solar Zone, a 250-acre park established within the University of Arizona's Science and Technology Park, is a leading hub for solar power generation, distribution, research and development. In working to recruit solar energy companies worldwide, the team is generating synergies and working to position the site at the industry's leading edge. Read more in this article, which first appeared in TechConnect Magazine: 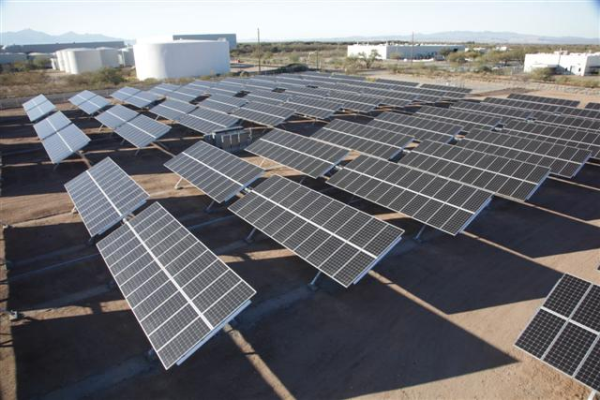 The sun is shining brightly on the University of Arizona Science and Technology Park.  The park is poised to become one of the major research and development centers for solar energy in the United States.

A year ago, the park’s management team set aside 250 acres of land to establish the Solar Zone @the UATechPark. The concept was to create an integrated, multi-dimensional research center that could foster all elements of solar energy development: generation and distribution, research and development, assembly and manufacturing, workforce training, and public education and demonstration. The goal of the Solar Zone is to allow developers and utilities to evaluate various solar technologies side by side under identical operating conditions to determine which are the most efficient and economical systems.

The creation of the Solar Zone received a big boost when it was embraced by Tucson Electric Power.  In 2010, TEP issued a request for proposals (RFP) to solar companies asking them to demonstrate their technologies at the utility or grid (megawatt) level.   TEP designated the Tech Park Solar Zone as a preferred site for these projects.  Subsequently, the company awarded contracts to five companies – Amonix, CTC Electric, Foresight Renewable, Emcore, and Solon Corporation.

When completed sometime in early 2012, these five projects will generate more than 13.5 megawatts (MW) of power. A sixth project is being developed on an additional 65 acres of land at the Tech Park by Bell Independent Power.  It is a concentrated solar power (CSP) field that will generate 5 MW of power and use a proprietary thermal storage system. When all six projects are on line, the Solar Zone will be the largest multi-technology solar demonstration site in the United States.

Last August, at a cost of $2.7 million, the Tech Park began preparing 165 acres for the TEP projects. In December, after moving 400,000 cubic yards of dirt, building a mile of roadway and installing 18,000 linear feet of fencing, the Solar Zone was ready to accept its first project -- a 1.6 MW single axis photovoltaic array jointly developed by TEP and Solon Corporation.  It began generating power in January 2011.  A second project is currently under construction by Amonix.  It is a 2 MW solar generating station on 12 acres in the Solar Zone.  It is comprised of 36 large concentrating photovoltaic (CPV) arrays. This project is expected to be operational in late spring. 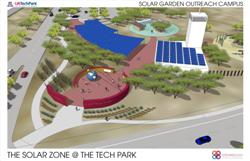 Power generation and distribution are only one component of the Solar Zone. Equally important is research and development. To successfully compete with coal and oil-based energy and become a larger part of the overall energy mix, solar energy must become efficient and less costly.  They key is new research and development. The Solar Zone is designed to provide university and industry researchers with state-of-the art laboratory and testing facilities.  Areas of research will include discovering new optical and solar materials, developing methods for storing solar energy, finding ways to improve solar arrays and tracking systems, exploring techniques to better integrate solar energy into existing electrical grid and distribution systems, measuring the impact of weather conditions on solar generation, and evaluating the performance of solar energy systems.

Later this spring, Dr. Joe Simmons, director of the UA’s Arizona Research Institute for Solar Energy (AzRISE), will lead the first university-based research project in the Solar Zone.  He and his colleagues will demonstrate the use of compressed air energy storage (CAES).  CAES involves compressing air and storing it in vessels either above ground or below ground. The compressed air is heated slightly using solar energy and then released to drive turbines that generate electricity.  This type of storage addresses the problem of providing an efficient and reliable alternative source of energy when solar energy arrays are not producing electricity. CAES holds the potential to transform and store large quantities of energy for widespread transmission and usage. 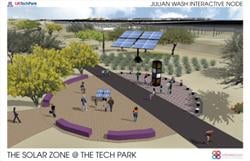 manufacturing and assembly of solar products including solar panels, arrays, and controllers.  The Tech Park team has launched a campaign to recruit solar energy companies from around the world into the Solar Zone.  The team recently returned from a recruiting trip to Israel, one of the hot spots for solar energy development.  Several Israeli companies have expressed an interest in locating in the Solar Zone. Similar recruitment trips are planned to Germany and Spain.

As the solar industry begins to grow and expand in southern Arizona, it will create the demand for a skilled workforce – installers, technicians, information technologists, and systems engineers.  With the assistance of the UA South, Pima Community College, and the Pima County One Stop Program, the Tech Park is facilitating an effort to develop a comprehensive and integrated curriculum for solar energy workers.  This curriculum would include classroom instruction, internships with solar companies and field work in the Solar Zone demonstration site. Equally exciting, the park staff is working with the Vail School District to develop a solar energy go-cart competition for middle and high schools students. Students would build their own solar driven go-carts and race them against teams for other area schools.  The program is designed to build student interest in careers in the solar industry.

The Solar Zone @the UATechPark is a work in progress. However, it already is a unique and compelling location for solar energy development. Building on the research strengths of the University of Arizona, following the innovative lead of a Tucson Electric Power and using the land and research facilities at the UA Tech Park, the Solar Zone can position Tucson to be at the leading edge of solar energy innovation and development in the world.

Bruce A. Wright directs the University of Arizona’s Office ofUniversity Research Parks (OURP). He serves as the CEO of the UA Science and Technology Park (Tech Park) and Arizona Bioscience Park (Bio Park) and president of the Arizona Center for Innovation (AzCI). He is also president of the Campus Research Corporation (CRC), which assists the University of Arizona in the development, operation, marketing and leasing of the Tech Park and Bio Park.