The Tucson industrial market showed positive absorption of 139,147 square feet (SF) at the mid-year point in 2011. In this article, we highlight the results of the study, and continue with the mid-year Tucson Industrial MarketBeat commentary that was published in July.

PICOR produces a semi-annual industrial absorption report, which includes property level detail on class "A" business parks and properties that compete with them, submarket summaries, and historical industrial occupancy since 1992. Our mid year 2011 findings include: 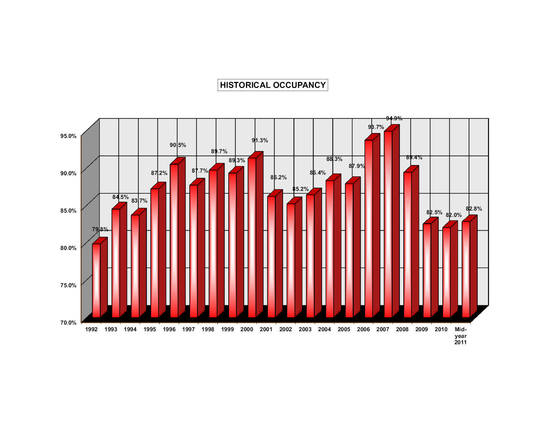 With a continued dismal picture for job creation the most significant factor in the economic health of the business and manufacturing sectors,Tucson’s return to industrial market equilibrium remains out of reach.

The markets in Nogales, Arizona and Nogales, Sonora remain healthy with few spaces available on the northern border for an active produce sector looking to secure space for the upcoming season.

Tucson truly tells a tale of two leasing markets, as activity is markedly different above and below the 10,000-square foot (sf) mark. While the market is on life support for larger spaces, under 10,000 sf we see some vitality in the market.

Tenants have capitalized on favorable conditions we reported in first quarter 2011, and aggressive deals have occurred. Lease rates are still very soft, and continued rent deflation is expected, though the rate of decline appears to be slowing. The quarter’s largest lease—the 103,000-sf building at 5901 S Belvedere subleased in part to Saguaro Conveyer—represents rent at a near historically low level.

Overall market vacancy improved slightly from 10.9% first quarter 2011 to 10.6% second quarter, but the current occupancy mirrors that seen in late 2009.

While larger industrial markets around the nation are enjoying increased investment activity, Tucson’s climate for investment property remains much as it was in first quarter 2011. Limited offerings are on the market, owners have no motivation to sell at decreased values, and those sales occurring tend to be one-off distressed sales from the lender foreclosure pipeline.

Beyond the Tucson market’s ‘summer doldrums’ which bring a cyclical slow down independent of economic conditions, national issues such as debt, healthcare and taxes ripple locally to cause uncertainty and lack of market momentum.

That being said for the short term, business, healthcare and academic interests are collaborating to support and market the region as a biotech and sciences hub, capitalizing on proximity to research strength at the U of A and the foundation established by Roche and Sanofi Aventis. In the University’s highest grant ever, the Lunar and Planetary Sciences Lab was awarded $800 million by NASA on the team pursuing an asteroid mission, OSIRIS-REx.

Visit PICOR's website for this and other market sector 2Q11 MarketBeat reports in printable PDF format with market statistics and construction and occupancy trends.