With aging U.S. infrastructure and an overburdened interstate system, one Tucson property owner is working on creative solutions to increase cargo business through the Port of Tucson intermodal facility at Century Park Business Center.

Plans by the Levin family at Port of Tucson would enable direct shipments to and from both Asia (via Long Beach) and Europe (via Houston). Because of weight restrictions for highway-based shipments, moving cargo by rail increases container capacity by as much as 20%. 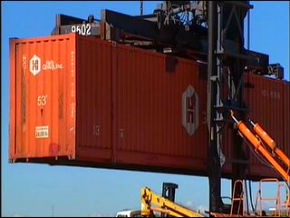 Read more in "Sun Corridor's advantages could draw global business away from other ports" published in Inside Tucson Business November 11, 2011. A few highlights from Roger Yohem's story:

"For transportation infrastructure, the future is in international containers. Instead of going into the Long Beach terminal, these two carriers would ship directly from Asia to the Port of Tucson," said owner Alan Levin. His 350-acre site is in a foreign trade zone.

"Every boxcar we do takes four trucks off the road. And if a container never sees asphalt, it can carry more capacity." (Levin)

Proper development of the Sun Corridor will attract out-of-state commerce and new tax revenue. Support services, such as warehouse and distribution operations, will benefit Southern Arizona because of its strategic location between Texas and California from east to west, and Canada and Mexico from north to south.

In addition, view this piece aired by Tucson's KOLD-TV on November 14, 2011, highlighting the Port of Tucson's key attributes and role in regional economic development. For any firms engaging in international trade and commerce, the warehousing, distribution and logistics hub at Century Park is postured to support and accommodate growth.