The report, University of Arizona Science and Technology Park: Economic Impact Calendar Year 2009 is authored by Dr. Jaewon Lim, OURP regional economist.  The study analyzes the economic and tax revenue impact of the UA Tech Park in Pima County for the calendar year 2009. 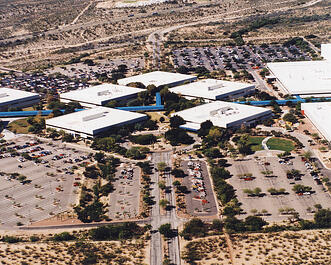 In 2009, the UA Tech Park and its resident companies had an economic impact of $2.67 billion in Pima County.  This included $1.81 billion in direct economic impacts such as wages paid and supplies and services purchased and $861 million in indirect and induced dollar impacts.

The study showed that the Tech Park remains one of the largest employment centers in the region. During 2009, the Park was home to forty companies and business organizations that employed 6,494 workers. In total, the Tech Park and its companies generated 14,322 jobs (direct, indirect, and induced) in the regional economy.

The study also revealed that Park companies drew their employees from throughout the Tucson region, not just from areas and neighborhoods immediately adjacent to the Park.

The study also reflects that the Tech Park is a source of high wage jobs.  Tech Park companies paid $471.5 million in direct wages to their employees.  The average annual wage was $74,400 compared to the Pima County average of $40,900 during the same time period.

“The 2009 data reflects a decrease in employees which was to be expected due to the state of the economy and the impact of the recession, said Bruce Wright, Associate Vice President for University Research Parks.  “However, by 2011 the Park had recaptured this lost employment with total employment increasing to 6,944.  In addition, the number of tenants had expanded from 50 to 52 reflecting the addition of new companies in the Arizona Center for Innovation and the development of the Solar Zone at the Tech Park.”

Information on space for lease at the UA Tech Park can be found on PICOR's website.

The UA Tech Park advances the University of Arizona’s research mission and its efforts at technology development and technology commercialization.  The UA Tech Park contributes nearly $2.7 billion annually to Pima County’s economy.  It is one of the region’s largest employment centers hosting approximately 50 businesses and organizations that employee nearly 7,000 people. The UA Tech Park is also home to the Arizona Center for Innovation, a technology business incubator, and three educational institutions - UA South, Pima Community College, and Vail Academy and High School.  The UA Tech Park has been nationally recognized as one of the premier university research parks in North America.  For more information, visit www.uatechpark.org.