Chief Economist Ken McCarthy of Cushman & Wakefield weighs in on the positive January employment numbers and the critical relevance job creation has on the health of the commercial real estate industry. Read Ken's comments below, and find links to additional research documents at the bottom of the post.

US January Employment Report - A Positive Start to the Year

The strongest growth was in the professional business services sector, where employment increased 70,000 jobs. Large increases were also reported in the manufacturing sector (+50,000 jobs), leisure and hospitality (+44,000) and education and health (+36,000). The government sector continues to shed jobs as states and particularly localities are forced to retrench under budget pressures. Office-using employment (made up of the financial, professional services and information sectors) increased 52,000 jobs, the fifth month in a row that these sectors have added more than 40,000 jobs. The last time that happened was from November 2005 to March 2006.

The decline in the unemployment rate is particularly encouraging. This data is obtained from the separate survey households (as opposed to the business survey that provides the payroll employment data) and that survey showed the number of people unemployed fell by 339,000 in January and has plunged by more than 1.1 million in the last four months. The labor force continues to grow, so people are entering the labor force and finding jobs.

The US economy is slowly regaining its footing after the interruption that started last spring. The employment growth of the last two months coupled with indicators of rising business and consumer spending (auto sales in January were the highest since mid-2008) are very positive. It’s still early and there are a number of important challenges facing the US economy including the resolution of European sovereign debt issues, the US budget deficit debate and the 2012 elections. But with corporate profits at record levels and household balance sheets in much better shape, the fundamentals are improving.

For the real estate industry there is nothing more important than employment. More jobs represent more demand for space. So a return to healthy job growth is the most positive sign in the last six months. Rising spending will also spur higher demand for manufacturing, warehouse and other industrial spaces. And, of course, higher consumer spending will help the retail sector. 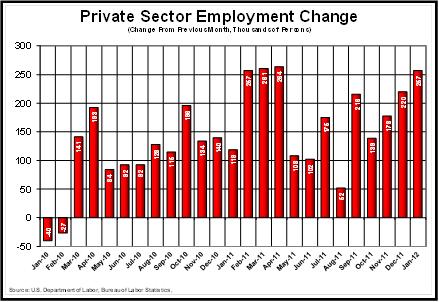 We are encouraged by this report, however, as the chart below shows, the economy turned in a similar performance a year ago only to falter. We have been cautiously optimistic on 2012 and this report reinforces that outlook.