Industrial Research Fact of the Week: Vacancy vs. Rental Rates

Even against a background of steady demand and declining vacancy, warehouse rental rates have yet to reach pre-recession levels. Although there has been a slight uptick in rents since year-end 2011, asking rents are still far from their 2008 values.

After declining to a recent low of $4.56 psf in the first quarter of 2011, the average direct asking rental rate for warehouse/ distribution space has only increased by 2.9%, ending the third quarter at $4.69 psf. Meanwhile, the overall vacancy rate has declined by 200 basis points during the same time period. 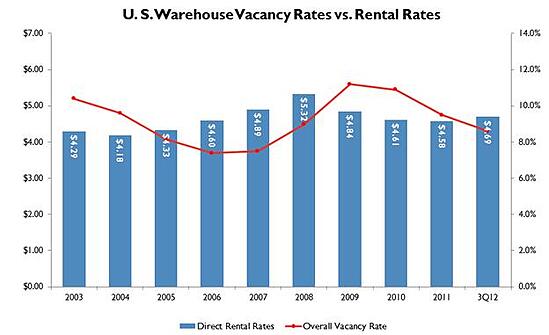 Recovery continues to favor newer, higher quality product. Newer bulk distribution buildings in first tier markets are in short supply, widening the price gap between class A and B/C space.

Increased demand for big-box quality space has triggered an increase in development activity. New construction deliveries totaled just 98.2 msf from 2009-2011, a 27.8% drop in new inventory from 2008 alone. So far this year, new construction completions have already exceeded year-end 2010 and 2011 totals with 22.4 msf delivering through the end of the third quarter.

For comparison, we have charted Tucson warehouse data, including both Tucson vacancy rates and direct asking rental rates. As with the national trend, Tucson's quoted rates for this type of space lag pre-recession levels and have remained fairly flat over a four year period, though rates for completed transactions have further compressed.

Vacancy appears to have bottomed out in Tucson on total warehouse inventory of approximately 18 million square feet. 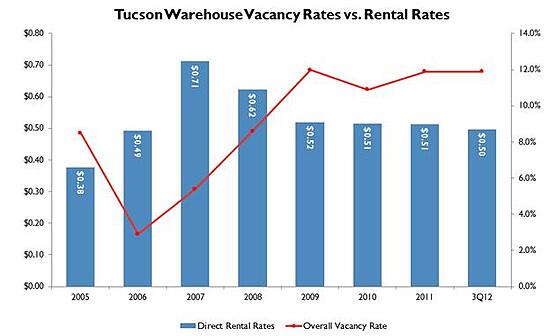