From an economic standpoint, the State of Arizona reported significant job gains for the local market in February, with Tucson’s unemployment rate improving to 6.7% from 7.3% in January. In the past year, 3,500 more jobs were added, largely in the education, leisure/hospitality and construction sectors.

For the first time in two full years, absorption was positive for consecutive quarters in the Tucson industrial market, signaling a trend toward firming fundamentals. First quarter 2013 absorption of 166,778 square feet (sf) was consistent with absorption in more balanced times. Contractions gave way to more business relocations and some expansions. Lease activity has been fairly broad based, with the largest transactions in the 8,000-20,000-sf range and no large, dominant deals among the quarter’s transactions. Small incubator-type space started the quarter strong and tapered into March.

Call centers, the mining sector and construction supply have been the most promising user groups, with residential suppliers beginning to fuel business park occupancy.

Except in the very competitive 15,000 to 20,000-sf space range, availabilities began to narrow, creating a sense of urgency for firms which may have been biding time before a move. 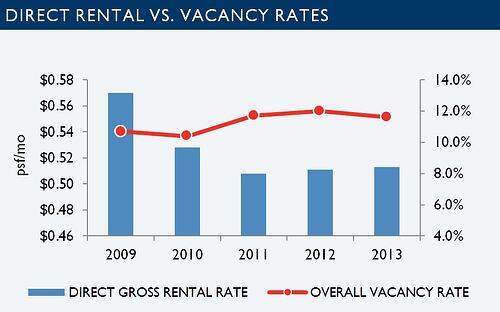 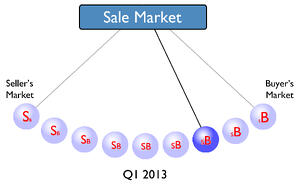 Aging building stock left behind, in both lower class and less well-located properties, may impact competitiveness for inbound requirements, and with no demand for new buildings, industrial land activity remains idle.

While the market remains tipped in favor of the tenant, it is trending toward equilibrium. If current activity continues apace, we anticipate long-awaited upward pressure on rents in another 12 to 18 months. Pressure on values may lag this time frame, as rents must firm first.