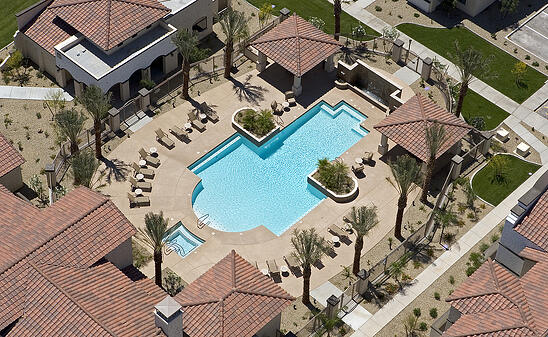 There are numerous exciting new developments addressing different segments of the multifamily market. Proposed downtown developments including The Gadsden Company’s Monier and West End Station projects and Holualoa’s redevelopment of The Herbert are midrise urban living projects and will answer the need for more housing downtown and contribute to the growth and vitality of downtown Tucson. Alta Vista Communities' AERIE product of rental casitas is a more private higher end product than the traditional two and three story garden style property and offers a product for those that may have bought entry level houses or townhomes in the past. HSL and MC Companies are also building quality new product with innovative floorplans attracting today’s renters. Average rental rates for the new properties is in the $1.00 to $1.15 per square foot (psf) range, well above the $0.86 psf average rental rate for the market.  Currently there are 1,770 units under construction and 2,454 units planned through the end of 2014. Of these, 933 units are student housing and 3,052 are market rate properties. The forecast is bright for Tucson’s apartment market, thanks to the University of Arizona’s continued growth, more people choosing to rent, and the need for quality rental housing in this marketplace. Tucson experienced underinvestment of new apartments for the ten years from 2003 through 2012 when only 4,512 units built. New construction is now compensating for the lack of development in the past decade and answering to an underserved market. 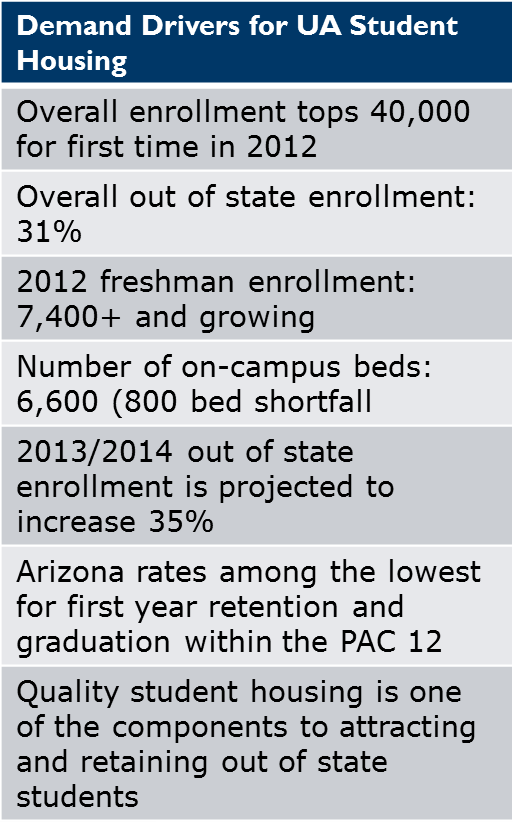 Student housing is experiencing an equally if not more impressive transition with 537 units set for delivery this month and 977 units between August 2012 and August 2014.  In August 2012 The District on 5th with 208 units opened and ushered in a new level of amenities and quality for student housing at the University of Arizona. August 2013 deliveries include Campus Acquisitions' 177 unit project called Level, Capstone's two downtown developments, Plaza Centro Railyard and Plaza Centro Greyhound, with 97 and 99 units each, and lastly Landmark Properties' The Retreat at Tucson with 164 units. August 2014 deliveries will include Campus Acquisitions Park Avenue apartments with 165 Units, CORE Campus’s The Hub at Tucson with 164 units, and possibly The Junction at Iron Horse, a 67-unit property from Royal Properties. In addition to these developments there are other sites in play with possible deliveries in August 2015 and 2016.

These 977 units and approximately 2,900 bedrooms will be a major influence on the student housing sector bringing previously unavailable high quality amenities and a higher quality living environment close to campus. Rental rates at the new properties will average in the range of $800 per bedroom and offer amenities including exercise rooms, rooftop pools, tanning beds, study lounges and more.  The addition of these properties off the modern rail car and in the Main Gate District will bring a higher concentration of students closer to campus and will most likely pull students from the student housing properties further away from campus.

While the amount of new construction may seem high, market indicators are strong and indicate that there is demand in place to absorb the new properties. The multifamily market has absorbed approximately 1,000 units each of the past four years and just experienced a rare positive absorption for the second quarter of 2013. With average occupancy for stabilized properties built since 2010 at 92.5%, with the local economy gaining momentum, and rising interest rates making home ownership less affordable, the future looks bright for new multifamily development in Tucson.