Continuing our series of quarterly guest posts from the sharp analysts at Reis, Inc., we share this update on Tucson office vacancy as well as the Phoenix office market. Read on for some good news, with indicators moving in the right direction. 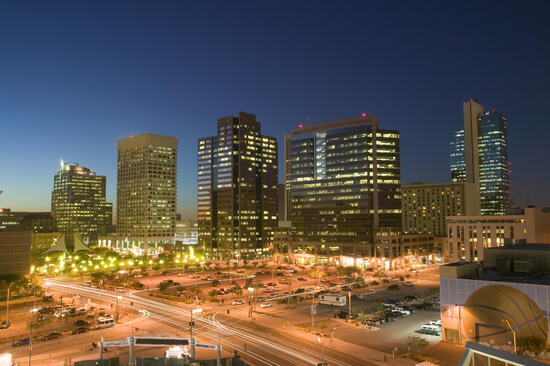 Phoenix’s office vacancy rate fell back to 25.8% in the second quarter thanks to its strongest quarter of net absorption since the fourth quarter of 2011. This came after rising to 26.0% in the previous period. The vacancy rate remains well above its pre-recession trough of 11.5% in the third quarter of 2006.

Not surprisingly, construction activity remains muted in response to the lack of even moderate demand for space. Vacancy is not expected to move much before the end of the year, but vacancy declines should start to mildly pick up pace in 2014. 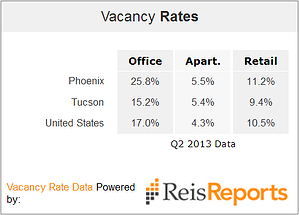 In response to increased (yet sluggish) demand for space, asking and effective rents increased 0.2%, the first rent increase since the second quarter of 2012.  Rent growth will be positive but only marginal for the second half of the year.

Luckily, property owners have not had to contend with any new supply - there have been no completions in the market since 2009.  This further highlights the lack of demand for space – with no new construction in several years, even moderate demand would have pushed the vacancy rate by a decent amount.  As a result, the vacancy rate will remain relatively stagnant over the next couple years.

Brad Doremus is a Senior Analyst at Reis, Inc.