How do you honor a great man's memory? We've found a way

On August 15, 2013, Cushman & Wakefield | PICOR lost a founding member of our team: Ken Nickel, a great man behind so much of our firm's success and survival in the early years. Ken passed at the age of 88, close to his three children and grandchildren in Colorado. His legacy with Cushman & Wakefield | PICOR deserves more than a mere mention, it deserves an ongoing honor, so we share this story with you. 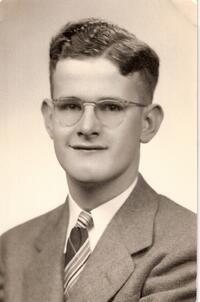 Ken was PICOR founder Mike Hammond's first hire. As a fellow Kiwanian and retired IBM executive, Ken was the perfect fit to manage every detail of our start up. As we grew, he became our office manager, and then as his golf dates multiplied, his role in the office shifted to special projects. Consistent through it all was his "roll up your sleeves and dig in" attitude to work, however complex or menial. For younger team members, he modeled an unfaltering work ethic and integrity through his actions.

AND OUR STORY TURNS TO PANCAKES...

The now sunsetted Palo Verde Kiwanis Club had a 32-year pancake breakfast tradition, raising funds for Tucson's most at-risk youth. Ken and Mike were members of that group.  In 1994, when the club ceased to operate, Ken assisted Mike with the formation of the PICOR Charitable Foundation to enable the event's positive community impact to continue. For many years, Ken led the organizational effort behind the breakfast; no small feat with a corps of dozens of volunteers feeding thousands of people each year and donating (at this writing) $580,000 into the community.

We learned from Ken's children that he wrote a 9th grade essay predicting the future, translating his childhood love of chemistry to a career in chemical engineering. He graduated from Michigan Tech after a significant mid-education detour serving in World War II, then worked for DuPont and IBM before his adventures with us began.

As evidenced by the photos the family provided, any discussion of Ken was always "Ken and Bea." As a couple married 57 years before Bea predeceased him, they always behaved like newlyweds at company functions, and we loved to see what matching outfits Bea had chosen for them to wear. Even more, we loved the rejects and overstock from her gourmet dessert business that found their way into our lunchroom for many years.

With the family's encouragement, we choose to honor Ken Nickel and his love of science and technology by establishing a Ken Nickel Memorial Grant. This grant will be directed to a program targeted to educate or advance disadvantaged youth in one or more of the elements of STEM learning. The award will match the highest grant given each year, and then be supplemented by additional corporate dollars.

Thank you for sharing our story and tribute. How can you help? Spread the word to Tucson non-profits serving disadvantaged youth, and consider donating to our Foundation, where 100% of the proceeds are distributed to youth-serving agencies.