Commercial real estate markets across  the  U.S. continued to improve in the second quarter. One important reason for this has been rising employment driving higher demand. That trend continued in July.

The details of the July employment report were for the most part positive.

The lack  of growth  in wages has been one  of the biggest disappointments of the current economic expansion, and while this employment report had some positive signs on the earnings front, we need to see more growth before we can say wages are growing strongly. In July, average hourly earnings increased 0.2% after a small decline in June. 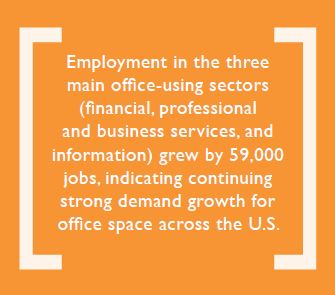 Currently, inflation-adjusted earnings are growing at their fastest pace since 2009, however, the overall pace of wage growth is still low by historical standards. In 2007 and 2008 earnings were rising 3.0% to 3.5%.

Last week  we discussed  the  drivers of Federal Reserve  monetary policy, noting that in the FOMC's announcement after its latest meeting, the focus was clearly on labor markets. As long as employment continues to grow at a healthy pace, there is no need to hold interest rates as low as they are. Today's report supports the expectation that the FOMC will raise the Federal funds rate at the next meeting in September. Unless something disastrous happens over the
next five weeks, we expect the Fed to start increasing interest rates in September and most probably raise rates again in the fourth quarter.

The  economy  is in solid growth  mode. The only missing component is stronger wage growth to support more consumer spending. All the data  point to  faster wage growth, but it is not happening  yet.

The current environment is a great one for commercial real estate.

A strong labor market will lead to higher interest rates and is a great environment for the commercial real estate industry.  That is where we are today and expect to be through the second half of 2015.