Total absorption in the fourth quarter 2018 decreased by 67 units. Northwest Tucson experienced the highest quarterly increase of 123 units, while the greatest loss of 95 units occurred in the South Central Tucson submarket. Over a one-year period, Metro Tucson experienced a 297-unit increase in occupancy.

The average monthly gross apartment rent without utilities in Metropolitan Tucson continues to rise, experiencing a $19 (2.5%) increase from last quarter. That brings the average monthly gross rent in Metropolitan Tucson to $786 or $1.05 per square foot. Twelve of the fifteen submarkets experienced increases in gross rent with the largest being a gain of $55 in Oro Valley/Catalina. Over the last year, Tucson average gross rents increased $57 (7.8%), with all fifteen submarkets recording increases in average rents. 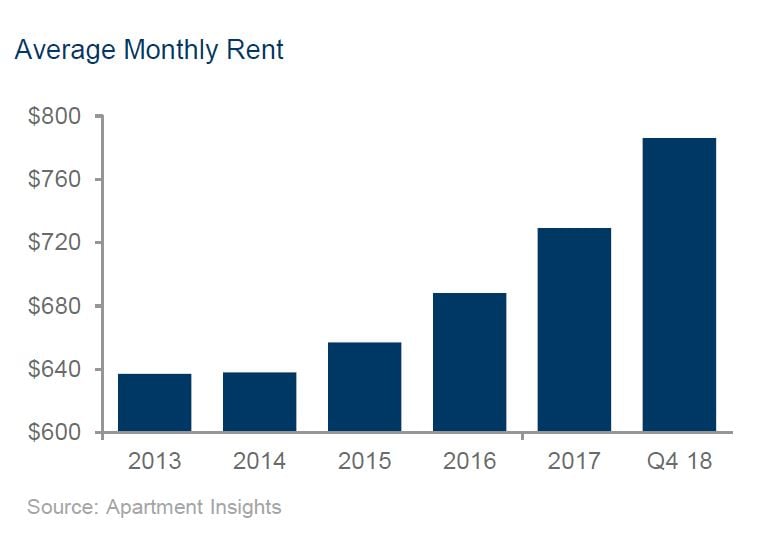 The Tucson economy continued to grow robustly in 2018. Total nonfarm employment is up 3.1% over the year, while the manufacturing sector led with a massive 7.9% gain. Aggregate retail sales posted a strong 4.5% gain as consumer sentiment remained buoyant despite the stock market moving into bear territory and the possibility of an inverted yield curve. Tucson personal median income rose 5.4% over the year and population grew by 1.0%. At 2.2%, inflation in Arizona matches that of the nation. A recession resulting from an inverted yield curve occurs 18-24 months after the point of inversion. Accordingly, 2020 would be the earliest recessionary onset, and any economic pullback is expected to be minor.

Tucson ended 2018 on a high note, as several major multifamily sales capped off what was a very active quarter. While stock market wobbles worried the rest of the investment world late in the year, the strong local economy, numerous companies relocating to or expanding in Tucson, and continued stream of deal-hungry out of state investors has kept the Tucson multifamily market buoyant. Moving forward into 2019, the Tucson multifamily market is expected to remain strong. Pima County’s 28 Opportunity Zones will become another demand driver as the Treasury Department offers more guidance on their implementation. Demand will likely continue to outpace supply into late 2019.