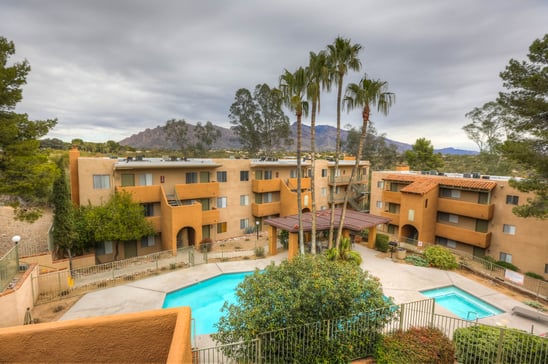 The average monthly gross rent without utilities increased by 0.9% ($6) to an average of $657 per unit/$0.89 per square foot.  Despite an uptick in rents, Tucson maintained its position as one of the most affordable markets in the country. The increase in rent is due to the absorption in newer communities and less of an indication of improvement in the broader market.  The Tucson apartment market continues to see limited rent gains.

The investment market continues to remain strong despite the slow progress in underlying metrics.  The marketplace has seen an uptick in new development in the downtown and university area along with Northwest Tucson.  Second Chance Rentals is expanding its presence in Tucson as they have now purchased over 350 units of nonperforming buildings.  Stabilized communities have a wide selection of cash-flow investors and have traded very quickly when priced correctly.

Jim Sellers, a 30-year Tucson mortgage banker, said this about the Multi-Family loan market in Tucson:  “Both Freddie and Fannie are under pressure to accommodate lower income tenants.  Thus, these affordable housing programs could offer great help to Tucson Class B and C apartment owners who can show a recent operating history of 90% or better.” The lending market began to open in 2015, and we expect more programs to be available for owners and investors.

With 4,700 jobs gained over the first eleven months of 2015, Tucson's employment picture continued to under-perform relative to the state and nation, primarily due to fiscal drag. Tucson has recovered 74.0% of recessionary jobs lost, while Greater Phoenix has recovered 101.0%.  Sector performance varied, with positive gains in professional and business services; leisure and hospitality, education and health care; financial activities; and information were largely offset by reductions in the other sectors, with the largest declines in state and local government. The Economic and Business Research Center at the University of Arizona calls for Tucson to grow during the next three years, but at a modest pace.  They predict job growth to accelerate from 0.3% in 2015 to 1.6% by 2017.