Tucson’s industrial vacancy continued its positive trajectory, improving by 50 basis points over Q2 2016 to end at 8.1%, the lowest level recorded since Q4 2008. With the completion of HomeGoods’ 858,288-square-foot (SF) distribution center, total net absorption to date in 2016 exceeded 1.2 million square feet (MSF), marking the first year over one MSF since 2006.The pendulum has moved to center in a balanced landlord/tenant market. Concessions are minimal and pressure is occurring on lease rates in some submarkets, particularly in the northwest, where rents have increased 10.0% to 15.0% over the last 18 months. The strongest part of the market is in the 5,000- to 10,000-SF range, with the preponderance of activity in that size level. Spaces over 50,000 SF still suffer from limited demand. 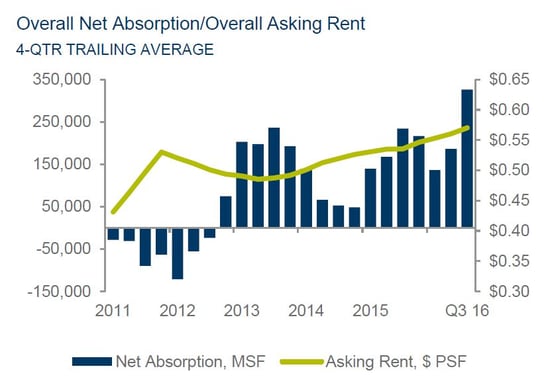 As a bellwether of the market’s health, after the lease of 55,000 SF with additional land, occupancy at the UA Tech Park stands at roughly 95%, with several transactions on the horizon which would bring the park to virtually full occupancy.

The sale market saw heightened activity, both from investors and end users. Buyers accustomed to an environment of distressed pricing are beginning to see increased competition for product and pressure on pricing and values.

Three user projects were under construction, including Worldview’s 150,000-SF facility and approximate 20,000-SF buildings for both Old Dominion and Switchgear Solutions.

Greater Tucson was recently named the third fastest-growing (employment) metro area over 500,000 population by Bloomberg, with year-over-year job growth of 4.2% in July and total employment of 378,050. The national housing recovery has improved Tucson’s prospects for population growth and is expected to spur construction. Arizona was the only state in the U. S. to experience month-over-month construction job gains in July 2016, and was one of three states to report year-over-year construction job growth. Nationally, September consumer confidence was at the highest level since 2007.

Tucson’s existing businesses, both large and small, have been quietly growing headcounts and have accounted for the Tucson region’s path to vibrancy over 24 months. Meaningful collaboration between public and private sectors has facilitated many hiring decisions and recent employment announcements will add future, positive impact. Planned hiring by Caterpillar (600 jobs), Worldview (448), ADP (400), C3 (1,132), Samsung SmartThings (80), and Tucson Medical Center (61) combine for a forecasted economic impact of over $3 billion. Other job announcements have occurred, with more expected. Future opportunities will arise from innovation and tech in the sharing economy, as well as job growth’s positive influence on the housing market.