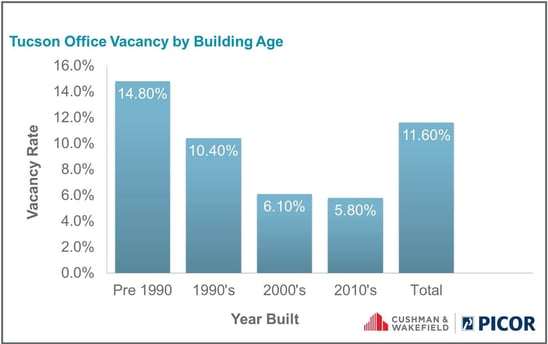 Sales activity in 2016 has not been for the faint of heart. Pricing, cap rates, financing and valuations have varied widely, primarily due to disparate motivations. The distressed seller would accept almost any price, while at the other extreme, some buyers pay a premium for that “right” property or investment. User purchases to date in 2016 represented about 75% of transactions by number, while dollar volume has been fairly split between users and investors. Prices paid by users varied widely, often for similar properties in the same development. Cap rates ranged from the low 6% to the high 10% range.

Tower cranes are active across the market with office, health-care, and hospitality projects well underway. Specific to office, buildings are under construction for the Girl Scouts on Broadway, at Puente Nuevo on Ft. Lowell and Marana Health Center in Dove Mountain. With a segment of the office stock functionally obsolete, many older properties may be destined for demolition, consistent with the trend toward desirability of newer spaces.

Greater Tucson was recently named the third fastest-growing metro area over 500,000 population by Bloomberg, with July year-over-year job growth of 4.2% in July, 2016 and total employment of 378,050. The national housing recovery has improved Tucson’s prospects for population growth and is expected to spur construction. Arizona was the only state in the U. S. to experience month-over-month construction job gains in July 2016, and was one of three states to report year-over-year growth. Nationally, September consumer confidence was at the highest level since 2007.

Tucson is gaining attention for all the right reasons, on the heels of recognition as a top city for millennials. The food scene has garnered national acclaim after being named the U. S.’s only UNESCO City of Gastronomy. Three Tucson schools were ranked in the top 25 by U.S. News & World Reports. Tucson’s existing businesses, both large and small, have been quietly growing headcounts and have arguably accounted for the Tucson region’s path to vibrancy over 24 months. Recent hiring and growth announcements will add future positive impact. Planned hiring by Caterpillar (600 jobs), Worldview (448), ADP (400), C3 (1,132), Samsung SmartThings (80), and Tucson Medical Center (61) combine for a forecasted economic impact of over $3 billion. And other announcements have occurred, with more expected. The momentum is palpable, and the outlook is extremely positive for Southern Arizona.