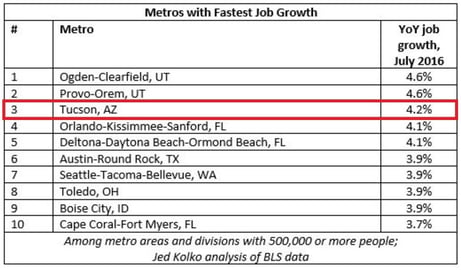 Sentiments, statements, and actions are telling. Both the private and public sectors have their oars in the water, and in large part, they are paddling in unison. It begins with job creation followed by meaningful wage growth. Consumer confidence spurs retail spending, providing revenues in support of infrastructure and education, thereby promoting community well-being and pride.

If you missed the fanfare, Tucson was recently named the third fastest-growing metro area over 500,000 population by Bloomberg, ahead of the likes of Austin and Seattle. Tucson’s year-over-year job growth was 4.2% in July 2016. Measures like this are retrospective, and the jobs announced in recent months have yet to be filled. Thus, the outlook is truly bright.

From C’s to T’s: The Tide has Turned

150 years ago, one in four Arizonans worked in mining. At that time, the “Five C’s” dominated the economy:  Copper, cotton, cattle, citrus and climate. Tucson’s mayor, Jonathan Rothschild, reframed the economic engines for a new era, introducing the “Five T’s:” Technology, trade, transportation, tourism and teaching. So what is behind the increased momentum and vibrancy in our community?

Last year’s major announcements are the employers of today. Take HomeGoods, projected to grow from 400 to 900 workers, and the Comcast Center of Excellence, with employment projections of 1,100 or more Tucsonans, including 15% military reservists, veterans and their partners. But what has been announced more recently?  See several listed below, and visit the Sun Corridor Inc. website for a comprehensive listing, including projected economic impact.

The combined estimated economic impact of those firms listed above totals over $3 billion. Major employer announcements make headlines with good reason. Meanwhile, expansions by office and industrial-space using employers often either do not, or cannot, make the news. Tucson’s existing businesses, both large and small, have been quietly gaining health and traction and have arguably accounted for the Tucson region’s path to vibrancy over 24 months.  A significant private aerospace employer, for instance, has shifted from reducing space and headcount to a more positive hiring and occupancy trend. 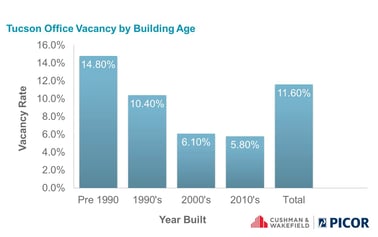 As a result of this steady, organic recovery and job growth locally, surplus and sublease office space in the Tucson market has largely shaken out. Overall market vacancy hovered around 12.0% for six solid years. At its current 11.5%, Tucson office vacancy has touched its lowest point since Q4 2009. Note that a share of that space is functionally obsolete. Our data reveals a strong differential between older and newer buildings, with those built prior to the new millennium sitting at 13.9%, and those built since 2000 enjoying a much healthier 6.0% vacancy.

Our community’s patience and resilience now have a payback. Greater Tucson has always been a great place to live and play, and it has often been a great place to work. I have been accused of irrepressible optimism in times past, but today’s measurable, meaningful job growth in Tucson tells its own story. May the fun continue, developing prosperity and quality of life for all in the region.

Barbi Reuter, RPA is COO/Principal with Cushman & Wakefield | PICOR, Tucson’s “Best Place to Work” 2016. She writes and speaks on commercial real estate and social media marketing and is passionate about creating opportunities in our vibrant community and industry. Barbi is dedicated to local and national board service for civic, charitable, and industry organizations. Named a 2015 Woman of Influence by Real Estate Forum Magazine, you can reach her by phone (520.546.2744), email (breuter@picor.com), LinkedIn (https://www.linkedin.com/in/barbireuter ) or Twitter (@BarbiReuter).