In analyzing the market for 2016, we think the market will advance significantly from the 2015 year-end adjusted vacancy rate, which lowered to 9.24%. When we made the prediction at the beginning of 2015, it was deemed to be laughable, as many felt the market was not poised for that level of improvement. We felt differently and stood by that prediction. It turned out to be correct, as year-end statistics/conclusions showed an actual vacancy rate decline to 9.10%. As we look to the future we see more positive momentum; accordingly, we predict the vacancy concluding 2016 will be 7.24%. This anticipates one large transaction in one of the five spaces larger than 130,000 square feet during the year. If such a vacancy rate were achieved, that would be a decline in vacancy by almost 2% in that period, relating to about 2 million sf. 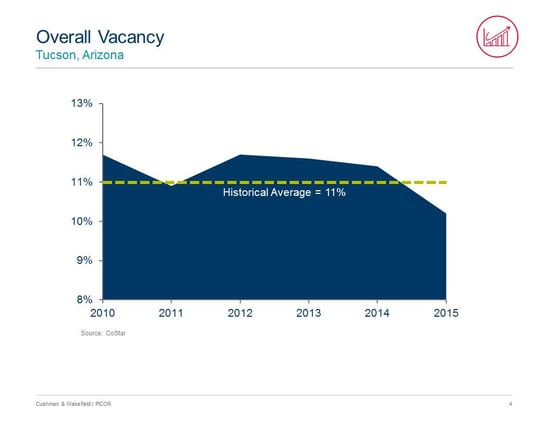 The real question is what will drive the improvement: Is it the improvement and stability as our major industries (government, mining and homebuilding), or is something else? The answer may lie outside of the expected market drivers, and can best be described as “non-traditional market users”. An example would be Autobahn leasing a 60,000 sf vacant warehouse for indoor car racing just south and east of downtown. Or World View choosing Tucson to grow their concept/company? Indoor baseball academy, churches, trampoline party facilities, skateboarding, and marijuana grow facilities are all among non-traditional uses filling space in the Tucson industrial market today. These uses are absorbing blocks of space resulting in positive absorption in the market  and bringing new jobs.

The above-noted examples have fueled Tucson’s positive market progress in the recent period. This surprised many in the market, and our continued improvement will continue to delight the market participants. Although it is difficult to predict exactly what will drive this progress, we need to consider the activity in the market. Certainly the announcement by Caterpillar Corporation will be an excellent driver of space absorption in the market.

Local firm PICOR Commercial Real Estate, founded by Mike Hammond in 1985, felt the need to enhance our community and clients’ goals by aligning with a global real estate firm. In 2008 we chose to align with Cushman & Wakefield, what is now the second largest international commercial real estate firm in the world, thanks to their merger with DTZ and DTZ’s previous acquisition of Cassidy Turley. As a result, our local access to broader service lines has resulted from the association. Kevin Thorpe, Cushman & Wakefield’s Chief Economist recently provided a US Macro Forecast where he points to an anticipated strong last half of 2016, as strong market fundamentals overtake the early-year turbulence. Says Mr. Thorpe: “The US economy and property markets are starting to fire up again as fears of a stalled expansion diminish.” Cushman & Wakefield sees a largely positive labor market that will continue to drive strong absorption in industrial, although less than record levels in 2014 and 2015 leading to a 5.9% overall vacancy rate, some of the best conditions ever seen in the sector.

Michael S. Hammond, CEO and President of Cushman & Wakefield | PICOR leads our firm’s activity in the border region and into Sonora, Mexico. We have staff on board specifically working the Mexico market. Says Mike about Mexico, “industrial activity in Mexico continues to be strong, primarily driven by the expansion of the automotive and aerospace industries. Also, as a key NAFTA member, Mexico is a critical part of the value-add offered in products manufactured together by Canada, the United States and Mexico. For example, 40% of the parts installed in automobiles manufactured in Mexico were manufactured in the U. S. Regarding Sonora specifically, Ford Hermosillo produces over 300,000 cars per year. This translates into more than 900 cars per day causing tremendous cross-border economic activity of parts going both ways. Finally, Sonora continues to lead Mexico in the growth of the middle class, a trend which will have a positive impact on the Tucson economy.

There are no identifiable signs of momentum on the industrial land front. A few sales of mention have occurred, namely the sales to Home Goods, Federal Express, and Old Dominion in the area just east of the Tucson International Airport. Although these are significant transactions, providing construction opportunities and job creation, it does not constitute land sale momentum. Our existing inventory of available buildings at low prices compared with the cost and time involved in new construction will limit measureable progress in this regard until we have accomplished further absorption. This will result in a reduction in vacancy rates and an increase in rents and sale prices, making new construction more attractive. In earlier years we sold as many as 250 acres of business park land for new building development, but that fell of significantly after 2007. In 2015, Home Goods purchased 108 acres, Southwest Gas bought 49 acres for a substation expansion and Granite Construction bought 78 acres for a materials pit. Otherwise, a total of about 83 acres sold in 15 transactions to industrial users at an average price of under $1.50 per square foot.

Stephen Cohen is a principal with Cushman & Wakefield | PICOR, specializing in industrial properties. He can be reached at (520) 546.2750 or via email at scohen@picor.com.