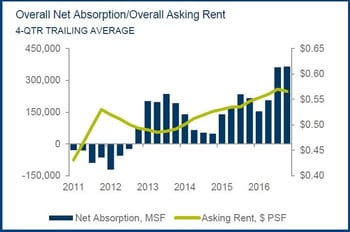 Heightened leasing activity in the fourth quarter was a result of local companies expanding, as well as a return of construction suppliers and Phoenix firms opening southern Arizona branches. The largest lease signing of the year was Chamberlain Group’s 300,181-SF lease with EastGroup Properties for a new build-to-suit at 2850 E Drexel. Construction is expected to begin early second quarter 2017 with occupancy by year-end.

Sales market velocity escalated in the closing months of 2016, with 15 sales signed during fourth quarter, the majority of which were purchased by end users. Key investment sales in 2016 included Clairemont Plaza, 4700 S Overland, and 3265 E Universal Way, with an average price per SF of $104.09.

In the year ahead, fewer lease concessions are expected and more rent increases throughout the Tucson industrial market. Next year should also bring heightened leasing activity for large buildings (over 100,000 SF). As Tucson’s largest private employer, Raytheon’s well-publicized hiring announcements spell good news for the region. Growth in the e-commerce sector will continue to benefit warehouse and logistics space, and job growth in the region will fuel further demand for commercial real estate. While the change in administration spells optimism from the business sector from a regulatory and tax standpoint, southern Arizona is directly impacted by shifts in trade policies.